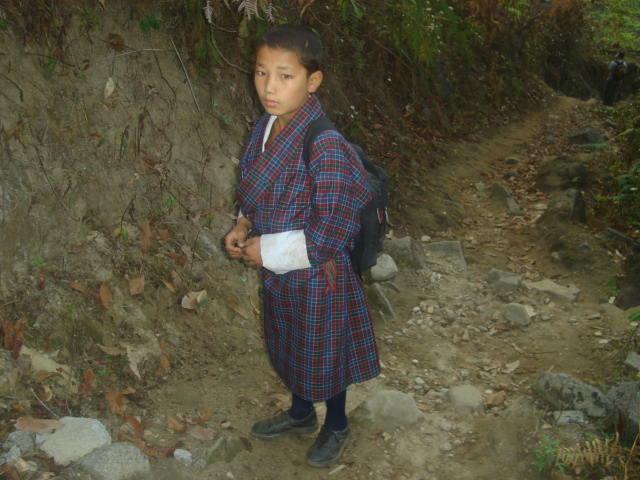 Fortunately, by the time he reaches the school, students have just congregated for the routine surrounding cleaning work and he is just there on the nick of time. The pearls of perspiration on his forehead are still fresh and he silently joins his mates in the Druk House.
"But the fatigue of having walked a long distance to school seems to overpower him and drag him to sleep"
Soon, he is in the class, trying desperately to listen to the lecture from the teachers. But the fatigue of having walked a long distance to school seems to overpower him and drag him to sleep.
Earlier that morning, he had woken up at the first crack of the rooster. In absence of electricity, his mother cooked him breakfast in the illumination of the kerosene-fed lamp. The time seems to race and when he is hardly done with dressing, it is already his time to start the journey. The journey on foot takes him almost three hours, through the jungle infested with leeches in summer and the wild animals too. Yet, his tiny legs make the committed steps towards the brighter future, hoping to receive himself good education and serve as an officer in civil service.
The burst of the bell woke him and his class teacher had already left, lucky that he wasn’t detected sleeping. The sleep bothers him for the whole day and finally the bell rings to call the day off and announce the classes are over. But for Kado, it is not over yet. He has another two hours journey to run down the mountain to his home after attending the evening prayer. Back at home, he has to spare the helping hands to his parents. The pigs in the sty have to be fed; the cattle have to be tethered.
Left with the last atom of energy, he goes to sleep looking forward to a cozy and comfortable life in the future. “Sweat more now to bleed less later.”

What is the National Butterfly of Bhutan?

Defining Tsa-Wa-Sum in One’s own Perspective

July 02, 2010
If I am asked, I would boldly answer, “The Tsa-Wa-Sum is “Gyeb, Gyelkhab and Meser”, (King, Country and People). But not everyone knows about what tsa-wa-sum is. Hence, when the superior ask them, they are left to conceive their own tsa-wa-sum. Once a meeting was convened by the Dzongdag. In a large congregation of illiterate rural people, the Dzongdag thundered, “do you know what tsa-wa-sum is?” “Can anyone from the crowd tell me?” The crowd went to pin drop silence and no one seems ready to answer. Are they scared of Dasho or no one has the slightest idea what it is? Suddenly, a Ngalop man sitting in the last bench, for whom Dasho is hardly visible, stood up. With his head bowed low, he answers, “The three tsa-wa-sum are Ngalops, Sharchops and Lhotsampas”. “This is because they are the three race in Bhutan” Dasho went into bout of annoyance but before he fired the man, another Lhotsampa (Southern Bhutanese Man) supplemented, “the three tsa-wa-sum are Royal Bhutan Army (RBA) Royal B
1 comment
Read more