A goat with another pair of pendulum Ear!!! 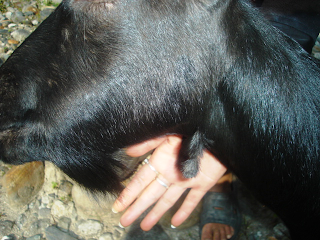 Interrogating the man as to how ever did such creature come into existence, the owner has to say that he has been rearing the goat for many years. One time a female goat got impregnated and delivered single kid. To every one’s surprised, they noticed such flesh elongation in it but took it easy since they sense nothing mischief or notorious in it. They accepted it as parts of the any other goat’s body such as legs, head, teat and more. Then the generation followed that every siblings following goats borne, they came with it. At the time of this finding, the goat is into the third generation and such pendulum followed thereafter.
"This is all what the owner could define such deformation as and for me to the capacity as nothing expert in it or otherwise a scientist, I succumbed to blindfolded satisfaction to what he explained me"
However, deep beneath it, there should certainly be some truth in it since such goats with four ears are rarely found and if not, never recorded in the world. Science may explain this as some deformation of the genes but it definitely deserves a serious study.
So, those aspiring to become animal scientist, here is an opportunity!!! Rush fast, stocks are limited…..!!!

September 13, 2012
Bumthanps in droves collects magic mushroom helping mint lots of money  All thanks to income he generates from selling Matsutake mushroom which Blue pine forests in Ura, Bumthang is endowed with, Thinley Dorji, 36 was able to put up decent roof over his head. This is in addition to the steady follow of money for educational expenses of his three school-going kids. But it is easier to be envious of such benefits than having to hear the whole lot of story behind the facade. It simply takes someone a whole lot of determinations and sacrifices in collecting the marvelous Matsutake mushroom. Thinley wakes up early, from the shed he spent his other night guarding his potato crops from wild animals. Believing that “early bird catches most worms,” he needs to be in the forests ahead of all other folks. Otherwise, what is grown will have to be shared among the parade of collectors. "Lucky for him, there was a light drizzle, the other night and Thinley heads out optimistic of the good
1 comment
Read more

February 16, 2021
It is mid-summer and Goshing Wangling, a remote village in Zhemgang has transformed into an extraordinarily beautiful hamlet. The quaint little hamlet has turned extravagantly lush with tropical vegetation fencing the village while the inside is chock-full with different varieties of agriculture crops growing green and fresh. It is possible to literally hear the butterfly wing beat and feel the soft seasonal breeze transport to some magical land of peace and plenty far away from the crowd of modern settlements. The vista stretches far beyond the little settlements. One wonders that if Wangling can contain and give so much, what amazing wealth of floral and faunal beauty could exist between the tall, splendid mountains faraway and the vast spotless azure sky behind them.  Peace that appears to reign so abundantly in this small village, however is not absolute. Hidden behind the façade lies a chronic problem. "The Wangling farmers have to constantly face rampaging wild animals tha
Post a Comment
Read more

Defining Tsa-Wa-Sum in One’s own Perspective

July 01, 2010
If I am asked, I would boldly answer, “The Tsa-Wa-Sum is “Gyeb, Gyelkhab and Meser”, (King, Country and People). But not everyone knows about what tsa-wa-sum is. Hence, when the superior ask them, they are left to conceive their own tsa-wa-sum. Once a meeting was convened by the Dzongdag. In a large congregation of illiterate rural people, the Dzongdag thundered, “do you know what tsa-wa-sum is?” “Can anyone from the crowd tell me?” The crowd went to pin drop silence and no one seems ready to answer. Are they scared of Dasho or no one has the slightest idea what it is? Suddenly, a Ngalop man sitting in the last bench, for whom Dasho is hardly visible, stood up. With his head bowed low, he answers, “The three tsa-wa-sum are Ngalops, Sharchops and Lhotsampas”. “This is because they are the three race in Bhutan” Dasho went into bout of annoyance but before he fired the man, another Lhotsampa (Southern Bhutanese Man) supplemented, “the three tsa-wa-sum are Royal Bhutan Army (RBA) Royal B
Post a Comment
Read more