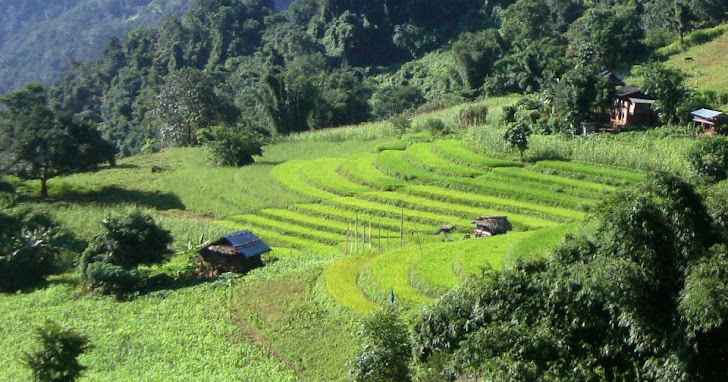 It is mid-summer and Goshing Wangling, a remote village in Zhemgang has transformed into an extraordinarily beautiful hamlet. The quaint little hamlet has turned extravagantly lush with tropical vegetation fencing the village while the inside is chock-full with different varieties of agriculture crops growing green and fresh. It is possible to literally hear the butterfly wing beat and feel the soft seasonal breeze transport to some magical land of peace and plenty far away from the crowd of modern settlements. 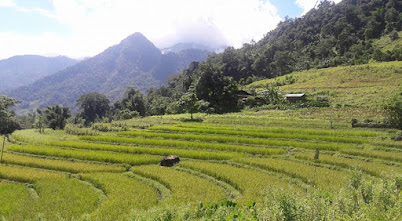 The vista stretches far beyond the little settlements. One wonders that if Wangling can contain and give so much, what amazing wealth of floral and faunal beauty could exist between the tall, splendid mountains faraway and the vast spotless azure sky behind them. Peace that appears to reign so abundantly in this small village, however is not absolute. Hidden behind the façade lies a chronic problem.
"The Wangling farmers have to constantly face rampaging wild animals that ravage their crops and nullify their hard work and toil"
In fact, when the village is laden with different crops, it attracts prying eyes of many, including different species of wild animals. In Wangling, battle has been raging for far too long. Ingenuity of either sides has only prolonged the confrontation. Neither party seems to give up, not easily. Farmers tie their dogs on the fringes of the fields, guard their fields themselves all day and night, erects scarecrows, attaches rope to their bedroom with other end attached to the tin hanging on the pole at the edge of the field but nothing of these seem to work as “magic bullet”. 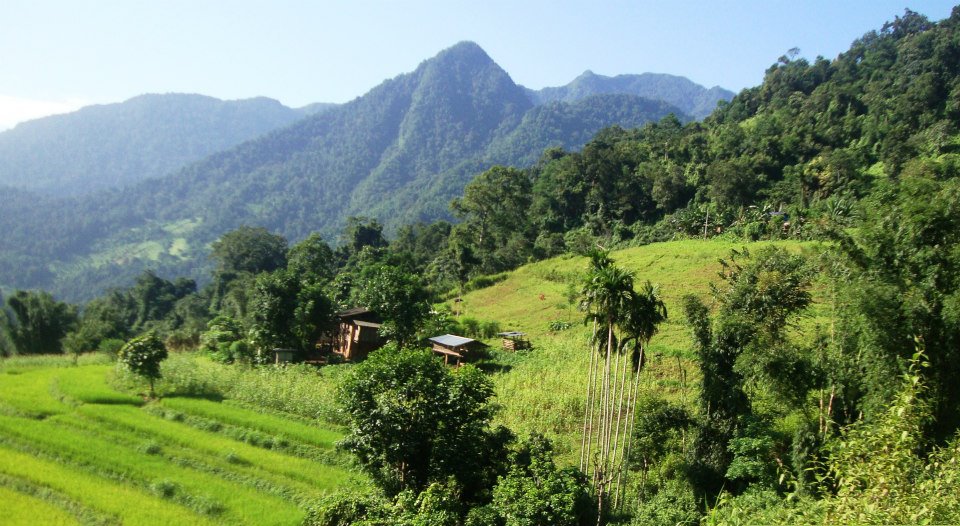 The ‘other party’ has adapted and are prompt in devising equally genius tactics. The wild animals somehow manage to sneak in and grab mouthful. But this is tolerable and farmers seem not to mind much. A morsel or two is alright, after all, it takes so much of persistence for wild animals to get it.

So, a morsel or two, they deserve all squarely.

But the real plight or predicament is when the whole family or a solitary but voracious spoiler plunders the whole field in one single night. When the whole of what was in the field the night before is nullified in the morning. When all that was standing, has been brought down, all down into shreds and shards. Then the situation becomes so dire that the year’s stock is at stake. 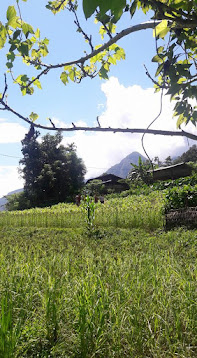 This is exactly what happened to Aum Yangzom, 59 of Wangling. Until few days ago, she was a proud owner a corn field. From the very first day, she has carefully nurtured each maize plant and taken care of them as much as she has done her children. The manures were applied, all other weeds but the maize plants were uprooted diligently. The maize plants responded well to her efforts. They slowly and steadily grew putting up erect and solid stem with long and narrow leaves.
"Every morning, she opened the husk on a random basis to check the kernels"
The hard labour slowly fruited when her maize plants formed corncobs, ears and kernels. Every morning, she opened the husk on a random basis to check if the fruits are matured enough for harvest. She seems in haste and rightly so, she knows it is at this stage that her maize plants are most vulnerable. With the kernel fully formed with milky grains, a look at it, makes every herbivore ooze out saliva from their mouth.
For last one month or so, she has been as busy and crafty as she has been in any other season. She has put in all measures to keep the wild animals away from her field. Old rags are in the field worn by a skeletal scarecrows and tins have been hung in every corner of the field. It has been months she last slept in her home rather she has spent sleepless nights in the temporary hut in the middle of the field, keeping the fire burning all through the night, in addition to making all sort of noises. Up until then, all this has succeeded in scaring away the wild animals and kept them at least few metres away from her field. 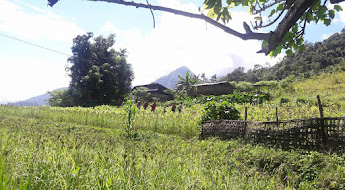 Her field is surrounded by dense forests and it harbours many species of wild animals such as wild boars, deer, monkeys, porcupines, etc. More than anyone, she is aware that they await in a stealth mode and are ready to spring into action, the minute they get the opportunity. Then there is no second chance for her.
"They would come in big herd and plunder her whole field"
One evening, last week, Aum Yangzom, prepared for yet another regular night in the hut. She pleaded it be like her other nights because putting up in the hut was one thing but keeping her field safe was quite another. Sun slowly disappeared from behind the last mountain in the horizon and the darkness engulfed her beautiful village. Aum Yangzom had a quick dinner and moved to the hut. She carried a traditional torchlight made of split bamboo. Once in the hut, she prepared a big bonfire and sat by the fireside occasionally crying out loud and banging the tins. 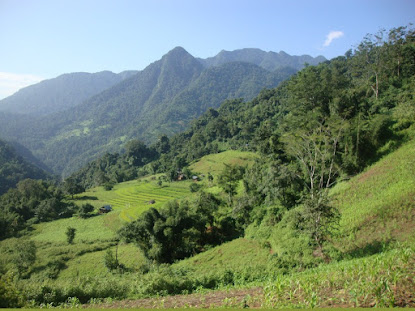 But as the hours went by, it started to rain. What started as drizzle, soon poured. All the noises she made got absorbed by the rain hitting the earth. But there is no fighting the natural phenomenon than to relent. As the fate would have it, by midnight she was fighting an overpowering sleep. Her eye lid felt heavy. She shook herself to reverie couple of times with fear for her crops. The she was listening to the rain falling persistently and the last thing she heard was a rain drop hitting the pot she placed at the corner to collect rain from the leaking roof.

"With a jerk, she woke up from her what she thought was a nap and felt it was eerily silent"
With a jerk, she woke up. It was eerily silent. The rains have ceased. She shuddered with the fear for her crops. It was already daybreak. She ran out of her hut to investigate the field. As she did, she kept pleading, praying, summoning all her gods and spirits. As she ventured further from her guard hut, her heart was on her mouth throbbing so hard. She feared it might burst. Suddenly, there it was. Her worst fear came alive. She stood there dumbfounded at what she saw. She was horrified at what she saw. A big chunk of her corn field has been destroyed. All her maize plants lie flattened on the ground with corns all shredded open. The maize plants were brought down, plucked its cob. A big family of wild pig had rampaged her field. They have ravaged a good part of her field relishing lavishly on her maize.
"The whole field looked like two giant elephants had a fight" 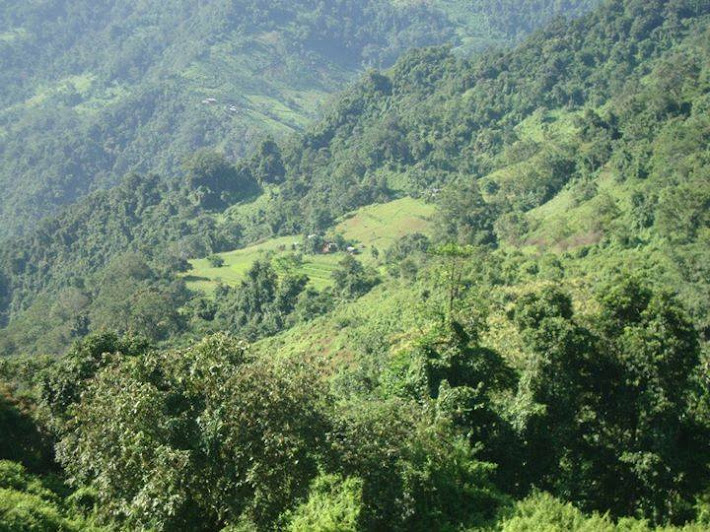 "She stood there for time she lost track of, doing nothing than shedding tears"
She cried. She cursed. She beat her chest in desperation. She know that it is her year’s food stock that lies on the ground. The maize plants have been damaged far severely that there is no bringing back to life. All she could do was think of how to feed her family for next 12 months, until it is season for yet another round of maize cultivation, another round of the bout with her eternal enemies. She say one last prayer that, perhaps next year, she won’t fail herself and be able to protect her crops from the rampaging wild animals.