February 25, 2021
Have you ever tried, even once, to stand outside in winter for few hours? Ok, let me be more lenient. Let’s keep it for few minutes? I’m pretty sure that a minute or two out in cold would send anyone rushing back to heater or Bukhari.
"Concerned that Desuups have to brace the unforgiving winter cold, His Majesty's Soelra was bestowed with supply of firewood"

It so happened that when lockdown 2.0 in Bhutan was imposed due to community outbreak in December last year, the temperature was plummeting especially in Thimphu. During such time, Desuups came forward in large number in spirit of volunteerism to ensure lockdown protocols are adhered by general public.
"When many people got bored locked inside their home, we were daily engaged in such tiring work" 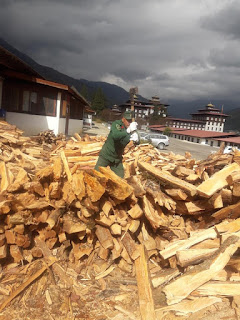 The nature of duty during such time entailed carrying out patrolling, guarding certain area, unloading of essentials, to name few. But the guarding of ‘red buildings’ I personally noticed was really challenging. But first let me tell you, Red Building, here hasn’t got anything to denote its colour but that a positive case has been detected. Such buildings are sealed, which means no tenants or occupants can come out.
"Firewood supply came as a huge relief to Desuups on duty, they could now make fire and fight the night cold better"
To ensure that doesn’t happen, Desuups in pair or more were deployed in strategic points of such red buildings. Desuups are stationed in these OPs (Outpost) 24x7 and they keep eye, advise and stop people from breaking the red building protocol. 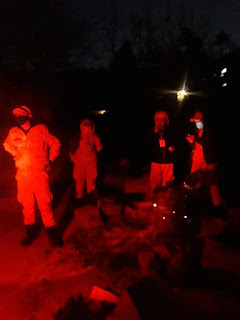 It takes a paragraph for me to describe the nature of performing such duty, but doing it in real takes a lot more effort. Having to be out there standing in cold, one can only imagine the sheer determination it takes to brace the bone-chilling winter cold.
"It took lot of toiling, at the end of the day, we were all exhausted. Yet, we did it with full obedience, dedication and commitment"
Record show that in December 14, the night temperature in Thimphu dropped as low as 5°C. Now such low temperature can really hit in the deepest of the bones.
But coming to the rescue of these Desuups, who had to brace the unforgiving winter cold in their service to the nation, none other than the command of His Majesty, the firewood Soelra was bestowed to all duty stations of Red Building. I have been blessed with the responsibility of distribution of firewood in fulfilment of His Majesty Soelra distribution, when I volunteered for it.
"None of us, who were all foresters, 11 in initial days and 9 more joining later, had a word of defiance, all took it up with full deference to the aspiration of His Majesty the King"
Over a period, which in some days, we ran into late evening, we reached and delivered firewood to as many as 50 such posts. While a team was engaged in splitting firewood back in piling area, another team of 3-men each and a Hillux, delivered. That came as a huge relief to Desuups on duty. With the firewood at their disposal supplied with barrels to make fire in, they could now make fire to keep warm. They can now fight the night cold better. 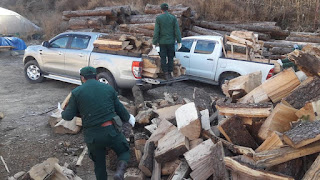 When many people got bored locked inside their home, we were daily engaged in such tiring work. Every day, we woke up early and after a breakfast went head on with the work. We had to rush when in the initial days, OPs kept increasing.
Having to lift, load and unload, every day, almost several hundred half split logs some of which were quite heavy really took so much of effort and determination. So, splitting to smaller pieces was thought to be better option. But splitting firewood isn’t any easier work as well. It took lot of toiling that by end of the day, we were all exhausted. Yet, we did it with full obedience, dedication and commitment acknowledging that this is also a critical service to the nation, that too during such trying times. 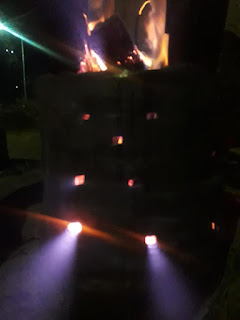 None of us, who were all foresters, 11 in initial days and 9 more joining later, had a word of defiance, rather we took it up with full deference to the aspiration of His Majesty the King and also knowing that it is helping Desuups Nyamroos (I’m also a Desuup myself having trained back in 2016 as 20th Batch).
What started sometime in early December 2020, such firewood distribution went on till the last such OP was lifted only in third week of February 2021.
However, at the end, we all went home proud that we could contribute our service as frontliner to the country when needed. But ofcourse, this is nothing as compared to what His Majesty is doing for us. With His Majesty leading in the front, our service as frontliner could help contain the community spread of the COVID-19 disease, for which all of us remain eternally proud and grateful.