When the whole colony is exterminated 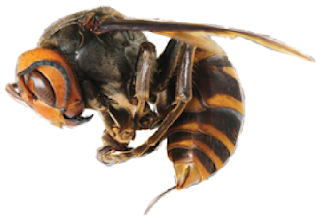 Like a starving predator after its prey, the man follow the lone bee in stealth mode. He makes sure he doesn’t lose the sight of it, no matter what. The bee flies to the bean creeper that flowers in winter. A second later, the man is right behind furtively. Tailing the bee for the next hour or two, they land up at the edge of the field.
"Bingo, he hit the jackpot"
Bingo, he hit the jackpot. It is right there, just under the buttress of a big oak tree is the whole colony. He doesn’t launch the attack immediately. He need to carefully assess the colony. There is this thing called rich and poor colony. The rich would reward him with several kilograms while poor would be hardly worth his effort.
Being a skilled bee harvester, he knows that the colony is attacked better at night under the cover of darkness. That way, he has upper hand and has to face minimal retaliation or counterattack. This means he gets less stings. He accepts that bees will fight back tooth and nail and he must be prepared to receive few painful stings. 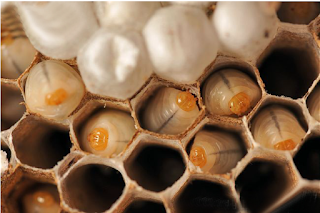 The battle ground is readied. He carefully marks the spot so that it will be easy for him when he return at night. The bushes within the location and en route are cleared. A stockpile of dry firewood is maintained just next to the hive. He will use this firewood to light fire and smoke the bees.
Oblivious of what is coming, the colony meanwhile is busy with its daily chores. The queen, drones and workers remain engaged in their own works. But it’s just few hour worth, until the man return. Until the man return to terrorize them. Then everything will be annihilated. Except for the charred hive and the lingering smog, everything will be wiped clean.
"Giant Asian Hornet is known as Apis mandarinia locally know an Bjingem"
Scientifically, Giant Asian Hornet is known as Apis mandarinia. Locally, it is known by the name Bjingyem. People describe hornet having an orange head, black mandibles and a black and golden body. It is said to be one of the largest bee species among seven and is also known as yak-killer hornet. Bee gatherers share that the hornet nest is best found low mountains and forests, in the burrows either dug by themselves or other pre-existing burrows.
"It is armed with a stinger of 6 mm which injects a large amount of potent venom"
It is considered one of the apex or dominant species among the bees since it feeds primarily on larger insects and honey from honey bee colonies. It is also known to hunt medium to large insects. It is armed with a stinger of 6 mm which injects a large amount of potent venom. Bee gatherers dread hornet than any other species because unlike other species, the hornet stinger is not barbed and therefore remains attached to it's body. Hence, a single Hornet has capability to sting their victims repeatedly. Its stings, science say, has a complex venom that is known to contain eight different chemicals, which can be pretty painful.
In the colony of Asian Giant Hornet, the queens, as scientific studies found out, decides where to build nest. She is known to select a suitably sheltered site such as the hollow trunk of a tree. The nest is usually built out of chewed up tree bark and well-built nest contain a series of single cell which together create the well compartmentalized honeycomb.
Once the nest is ready, a queen is said to lay fertilized egg each in each cell which hatch within a week. This happens in spring season. The larvae, before it becomes an adult is said to undergo a five-stage changing process for next 14 days.
The colony reaches maximum population when the larvae fully matures by late summer. The colony will then consist of around 700 workers, most of which are female, studies has found out.
"Asian Giant Hornet is an apex predator"
Since Asian Giant Hornet is an apex predator, it is said to have no real natural predators. However, human is the biggest threat. Human are known to relish the hornet and are consumed as part of normal diets.
The conservation status of Asian Giant Hornet is listed Threatened species that if it is not conserved and protected it has faces the risk of extinction in the near future.
The Forest Protection and Surveillance Unit (FPSU) under Department of Forest and Park Services, last year alone recorded six cases of illegal harvesting of hornet hive. A 7 kgs of products were seized and the culprits were slapped with a total fine of Nu. 0.088m. Trashigang territorial forest division reported 3 cases while other 2 was reported from Wangdue. One was detected by FPSU.

Official with FPSU said that the case of illegal collection of bees are equally serious as any other illegal wildlife activities. Infact, foresters say that ecologically, hunting bees is more destructive since it involves extermination of the whole colony.
FPSU’s Choglay Namgyel said that bees has critical ecological role. “Hornets and Wasps play an important ecological role as natural pollinators and as biological control agents for natural pests.”
He also said that the increase in the illegal collection/harvesting of different species of Hornets (Bjingyem) and Wasp (potom) and other insects for consumption and sale in the country is having detrimental impact on the population of this species in the wild.
He added that as apex predators, the removal of these species could have serious consequences to the fragile ecosystem which we all are part of. He cited that possibly the emergence of mass army worm and related epidemic can be due to extermination of bee and wasp colonies.
"Investigation has found that poaching of hornet is opportunistic in nature"
Investigation has found that poaching of hornet is opportunistic in nature. Record state that such illegal activities are carried out in warmer localities where hornet prefer to build their nest. “The dried nest containing larvae and adults are brought to Thimphu and other major towns to be sold for consumption,” it is mentioned in the record.
He also said that bees are harvested because of supposedly medicinal content. “Many believe that honey and other bees’ products contain high medicinal properties.” He added, it is also considered as home delicacy. Many, he shared, also sell them in the markets. But he warned that the department view such collection seriously and culprits are penalized severely.
Meanwhile, its already dark and 40-year old man accompanied by few others are headed to the colony. They light their way with the split bamboo torch. Once at the site, they make a fire. The escape holes are sealed and from the other end, a thick plume of smog is channeled. Hornet colony is being terrorized. The whole colony is in full chaos. The smog knocks the hornets senseless and soon they rain down on the ground.
Once the burrow is eerily silent, the hunters pluck the hive. The larvae can be seen wiggling inside the cells of the comb. Some of the adults died still attached on the comb, while majority are on the ground. All in all, it is almost close to a thousand of hornet individual. They are scooped clean and hunters walk home with a load.

"The family that evening enjoyed a sumptuous dinner"

Once home, the larvae are removed from the comb and cleaned, while the adults get their wings removed. Once it is thoroughly washed, some of them are left to be dried so that it can be taken to the market to sell. An enough of it are roasted, fried and cooked. The family that evening enjoyed a sumptuous dinner but little did they realize that they’ve committed forest crime, which if apprehended could get them slapped with heavy fines and penalties