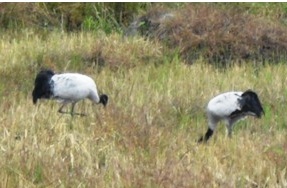 The melody of its call is unique and carries strong message of its presence as their calls reverberates in the valley. Such melodious call can be tracked to the wetlands in Opkina of Minjay Gewog under Lhuentse Dzongkhag. The wetlands now abandoned after having all the paddy harvests securely stored in the granaries serves as perfect roosting place for them. The marshy terraces with leftover grains during harvest are what they are after and are abundant here.

For people around, it is nothing unusual to hear such sound around this time of the year.  It is their esteemed guests – the graceful Black-Necked Cranes (Grus nigricollis) in their place in the backdrop of its brink in extinction. They have been the hosts to the endangered birds every year in winter. People claim that the cranes have been wintering to their places for many decades now. However, of late the visits have become irregular.

A couple of Black-Necked Cranes coming to roost in wetlands is a boon not to only the Communities of locality but for the conservationist as a whole. The lone couple was first spotted on Saturday, November 20, 2010. However, unconfirmed reports say that the cranes were in the area couple of days before actual photo-capture. It is also assumed that the two cranes spotted are a male and female each since cranes are known to commit and live as faithful life partners.

Cranes hovering in the sky just above their terraces is a great excitement for the owner of the lands. This is because cranes landing on their wetlands promises bountiful harvest in the following year. The truth however is yet to be proved. But such local orthodox belief has its own bearing on being able to keep the cranes undisturbed. Except for the children who enjoy the fun of running with them, cranes for now are known to co-exist in good harmony with the local communities.

On the contrary, author has also accessed the incidences of children hunting the birds with bows and arrows in the past needless to mention about practicing the target by throwing stones. Unknown to them the biggest blow to the conservationist who has committed themselves for preventing the extinction of the species was also when death of one bird went unreported. This can be attributed to the low literacy of the people on significance of the birds in an environmental arena.


This is where the Governmental departments, NGOs and individual conservationist should come in play. In order to atleast maintain the current trend of annual migrations, there is lot of advocacy, education and awareness to be imparted to the communities. Otherwise, in years to come, threatened by the nature of the people, they will stop the migration and choose to die elsewhere.

The latest figures recorded till early December 2010 stands at highest of 5 Nos. The lone couple after they found good availability of roosting place encouraged 3 others to join the exodus later.  With atleast 591.42 acres of wetlands cultivated in Menbi and another 401.71 acres of wetlands cultivated in Minjay Gewogs, Lhuentse Dzongkhag has potential to invite more and more birds in winter provided there is willingness to invest few energies and money from all stakeholders.